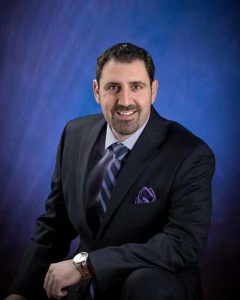 Nectarios “Neo” Nicolaou, General Manager at Sacred Wind Communications, Inc. (“Sacred Wind”), has been selected as one of Albuquerque Business First’s ’40 Under Forty’ honorees for 2019. The award honors outstanding and talented young professionals and leaders throughout the state.

Neo began his career in February 2007 with Sacred Wind, a leading New Mexico rural telecommunications company. As one of the Company’s first employees, Neo has garnered a deep knowledge of the telecom and broadband industry as it relates to service for rural and tribal communities in New Mexico. Neo was promoted to General Manager in 2015 and has contributed greatly to the success Sacred Wind has achieved in bridging the digital divide.

He directs the company’s operations, which include the engineering, IT, sales, and accounting departments. Under Neo’s direction, Sacred Wind and its affiliates continue to explore innovative ways of providing vital telecommunications services to rural communities in the most remote areas of New Mexico that are a challenge to reach. Neo graduated from Arizona State University in 2004 with a bachelor’s degree in business from the W.P. Carey School of Business.

Sacred Wind was voted the most inspiring small business in America in 2009 by the AMEX Corporation and NBC Universal. Additionally, Sacred Wind is regarded as a success story by the Federal Communications Commission and the USDA.